DORCHESTER Reporter: With sweep of 5th Suffolk race, Miranda credits win to "what if" instincts 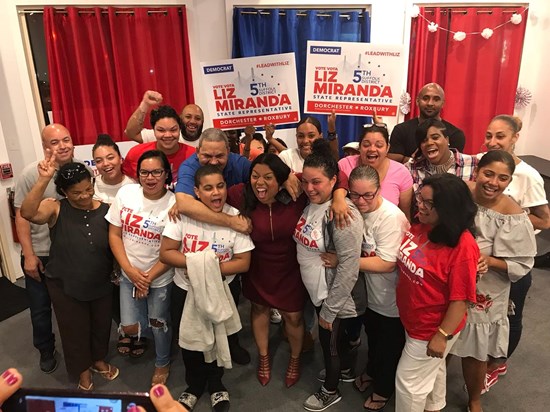 Liz Miranda was up at 7 a.m. last Tuesday, and promptly told she was banished from the campaign office. She cast her vote for the first time at her new home precinct, the Lilla J. Frederick School, went with her family to the Roxbury precinct where she grew up and spent most of her adult life, then it was out to the polls for election day with coffee and snacks in hand for volunteers.
Twelve hours later, the 38-year-old Miranda would clean up in her race for the 5th Suffolk District, winning all 20 precincts and 59 percent of the vote against primary opponent Darrin Howell.

A first time candidate who cut her teeth in organizing as a young teenager with the Dudley Street Neighborhood Initiative, Miranda said she wanted her campaign to be “inspirational, inclusive, and innovative from the beginning.”

In an interview with the Reporter at Dudley Cafe, wearing a bright dress and occasionally fiddling with a wooden stir stick in her tea, Miranda looked ahead at the next few months. She still has a November election against independent candidate Althea Garrison, who held the seat for one term in the early 1990s before being unseated.

“I know everyone says there’s election math and science, that you want to concentrate on people who vote,” Miranda said, “but my gut, over and over again as I walked down streets, was like, “what if? What if we inspire the kid on the corner? What if we inspire the person who hasn’t felt like they’ve been a part of the district?”

There is not a reliably easy way to gauge voter support on the day itself, Miranda noted, having worked at the polls for about eight years in other elections, but the generally sleepy district seemed more bustling than usual.

If there was increased turnout, Miranda thought, “my hope was that those are the people we had activated that weren’t necessarily part of the political landscape.”

Turnout was three times that of the 2016 primary for the same seat, and won by incumbent Rep. Evandro Carvalho. He decided not to run again this year, instead mounting an ultimately unsuccessful campaign for the open Suffolk County District Attorney’s seat.

The addiction epidemic, tackling sober home regulation, and advocating for basic quality-of-life investments are on her earliest to-do list should she make it to Beacon Hill, Miranda said, along with connecting with her likely new colleagues as well as those on the city side like her supporter City Council president Andrea Campbell.

“I would like to do some cross-state sector convening, around some of the issues that are really municipal,” she said.

Miranda also plans to have a series of district town hall forums in October, “to help finalize some of my agenda, to leave that room for residents to sort of lead and say, “hey, we actually want you to champion these things,” across the board.”

The district — young, diverse, and with a lot of turnover in state representatives over the past decade — had two strong options in Miranda and Howell, a political organizer.

September concluded one leg of a long campaign, Miranda said, claiming multiple pairs of shoes and many nights of rest. Election Day itself was a madcap dash between polls and scheduling some Liz-time to get a pedicure before hopping right back out on the trail.

“It felt good, it felt really good, I got a lot of hugs,” the new Democratic nominee said. “I don’t think people really realize that there’s a physical side of campaigning, there’s sort of the mental side. And there’s a very public side, but the private side of it is actually a very grueling, physically intensive experience.”

Miranda knew that onlookers assumed she, a Cape Verdean woman from Roxbury, would focus on that area. That was not the approach she took — crisscrossing the district, reaching out to Vietnamese residents that make up a large chunk of the community, to the Grove Hall area she now calls home, and out further into Dorchester, which makes up the bulk of the seat.

“I haven’t changed my spiel from day one,” she said, “that I believe that being from here matters. I think having someone that could be as effective in the State House and in the community is also important.”

Miranda’s predecessors in the seat spoke well of her efforts to run an inclusive campaign before her win.

The decision to site Miranda campaign headquarters at 246 Bowdoin St., in the middle of the district and outside of the Roxbury area some considered her most reliable base of support, was notable, former state Rep. Charlotte Golar Richie said in early August.

“It means she sees Bowdoin Street as a place where they would like to see something positive happen in that area,” said Golar Richie, who succeeded Garrison in the 5th Suffolk seat.
Soon after the polls closed Tuesday evening, her headquarters was already buzzing.

Former state Rep. Carlos Henriquez stood on a corner outside the campaign office next to a group of young men wearing Liz Miranda shirts. Volunteers shrieked happily nearby -- the mood was optimistic and campaign staff felt confident of a win but had not yet announced it to the group.

“I feel like you see, especially when you look at this corner, you see what community building is all about,” Henriquez said. “You see family, you see friends, you see diversity of age, ethnicity, all backgrounds, and I think that truly speaks to the bridge builder that Liz has been and claimed through this campaign.”

Miranda won her race on the same night as three other women of color were victorious in high profile competitive races -- Ayanna Pressley in the 7th Congressional District, Rachael Rollins in the Suffolk DA race, and Nika Elugardo in the state representative district around Jamaica Plain.
They, too, benefited from hard-fought campaigns to bring out populations that do not always vote in primaries.

“I didn’t know that was everyone else's strategy, because actually people thought I was crazy,” Miranda said of the broader context, “all the feedback I got was, they’re not good voters, they’re young, they’re not going to go out to vote.”

That proved a misread, at least in her district, Miranda said.

“I do think, now that we’ve seen the result, what it says is, we have to be for everyone,” she said. “In order to change what is politically possible, it takes engagement as well as empowerment.”

Paid for and Authorized by the Committee to Elect Liz Miranda